So, as promised, here I am, living it up in my kayak. It's grand. I sit here, watching birds ( seriously, one day I WILL catch one), catching the breeze, being made a huge fuss of (other paddlers wave to me and comment on how cool I am)and generally enjoying myself. It really is mint fun. The Two Legged Ones take me back to shore after a while but I just go straight back into the water until they come get me again. I'm a bit of an adventure hound these days!! Anyway, it's time for my walk so woof for now! 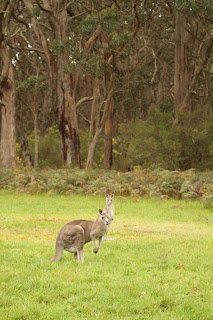 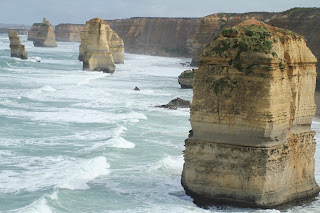 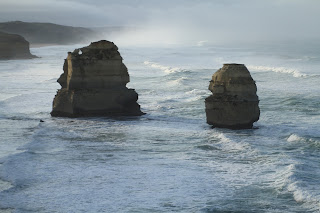 I was tasked with telling you all about the Two Legged Ones adventure to the Great Ocean Road - well, that was four months ago so I'm a bit behind.  What can I say, I'm a busy four legged one!  Anyway, they had a blast.  I didn't go - I could have, of course, but I figured it better to stay behind and hang out with the Older Two Legged Ones.  It turns out the Great Ocean Road was quite amazing - the Two Legged Ones always like it when a place looks just like it should - and apparently the Twelve Apostles (actually, there aren't twelve at all but that's another story) looked just like the postcards and photos they had both seen for years.  so, they loved it.  They stayed at this very cool eco lodge http://www.greatoceanecolodge.com/ which was the highlight of the three days on the GOR - they saw koalas, woke up to a huge mob of roos only 100m from their bedroom door, had amazing food and the silence was total.  They loved it.  The Great Ocean Eco Lodge is associated with the Cape Otway Centre, an organisation that they found truly  inspirational http://www.capeotwaycentre.org/   The Two Legged Ones said they would go back there tomorrow and live there if they could!  Apparently I would love it!  They went to see the Twelve Apostles early in the morning and told me it was stunning beyond words.  They went over the Apostles in a helicopter and also went right down to the ocean to see them closer up (using the Gibson Steps - carved into the cliff by one very industrious man - with perhaps a tad too much time on his hands) - but of course, one of the Two Legged Ones wasn't paying attention and got swamped by a huge wave and almost got stranded ...... sometimes, the other Two Legged One and I think it's a full time job looking after her!  They spent a few days in Melbourne on the way back and well, of course, I heard all about that, at length, when they got back - they love Melbourne, would take me to live there tomorrow, they love it so much - the food, the laneways, the art, the museums.  They visited the MCG sports museum and the Australian Two Legged One was delighted as she got to see Phar Lap's training saddle.  So, I've included some photos for you below.  I'm doing my usual, enjoying life to the full, hanging out with my buddies, charming all I meet, renewing my vendatta with the magpies (I nearly caught one the other day but the Two Legged One stopped me from continuing the chase - complete kill joy that one) and trying to avoid the horrible, sweltering heat that is Summer here.  Anyway, more later - I've taken up the kayaking as promised in my last blog so I'll be updating you all on that soon.  I've become a bit of an adrenalin junkie you see.  More soon.  Woof for now.  xxx The G Man
Posted by Groucho at 12:22 No comments: