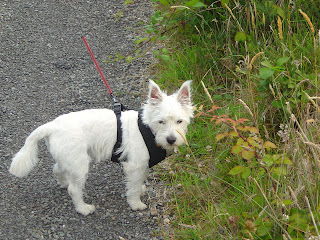 As you know Groucho has many super canine powers but perhaps one of his most super powers is his walking - Groucho can walk for miles and miles and miles and then some. And he does. The fun Groucho had on his walks around his new home! The new smells, the new sights, the new sounds! Every morning, wind, rain or sunshine Groucho was ready at 6am for a walk. His little ears would be all perked up, his little nose twitching with anticipation and his little paws waving madly in the air as soon as he saw the lead come out! And if Groucho thought we were not ready he would come over and nudge us with his nose - this is Groucho's way of saying "Come on, hurry up and take me for a walk". Well, boy did Groucho have some fun on those walks! Groucho's favourite walk around his new home, was probably into the field on the far bank of the river where he would bound along, more like a rabbit than a dog! Groucho would leap across the thistles, roll around in the grass and race through the weeds, incredibly fast! Maybe he is a greyhound and not a Westie - no he is just a Wonder Westie.

One day, Groucho was very surprised to find a horse in what he now considered to be his field. This was a surprise to Groucho as, even though he had seen cows and sheep when on holiday in Kerry, he was not quite sure what this four legged noisey creature was and he was also a bit surprised that a horse was living in the city! But, very soon, Groucho and the horse were great friends and would greet each other every day by touching noses through the fence. Groucho was very upset when the horse had to leave! He would sit by the fence, looking for his friend but, fortunately, Groucho soon made another friend, Lilly, a Westie who lived just up the road from Groucho. Groucho loved visiting Lilly as Lilly's house had a big garden where Groucho could dig and run around and chase Lilly and take Lilly's bones and bury them. Poor Lilly! But, really, Lilly and Groucho were great friends and loved their lunch time walks together, through the park, off their leads, chasing each other, chasing birds, running around in circles, two white little bundles, having a wonderful time together. Groucho often ended up in the river and this would result in us having to climb down the banks, wading into the river to get him, as Groucho's super canine powers did not extend to working out how to get back up the banks! Lilly was very good to Groucho and often invited him up to her house for a run in the garden, treats from her bowl and to play with her toys and Groucho even stayed overnight sometimes and made himself very much at home, including taking over Lilly's basket! It's a good thing Lilly was so patient with him and so ladylike! 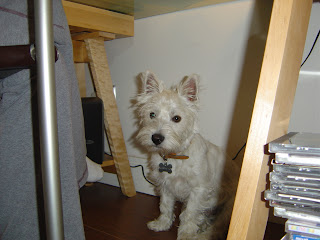 Groucho's other walks involved walking up to the local cafe and just chilling out while we had coffee and cheesecake. Groucho loved those walks as he was very spoilt by everyone at the cafe who all made a fuss of him and gave him little treats. That was a great walk as there were often leaves on the pavement and Groucho absolutely loved chasing them and trying to eat them! Every once in a while, Groucho also went into Dublin on Saturday mornings to the market and this was really great fun. One day, he walked through a very busy Grafton Street to St Stephen's Green and barked at the ducks. Poor Groucho was quite upset when they ignored him and just swam away, but he was soon very happy again as so many people stopped to say hello to him and tell him how cute he was. Of course, Groucho loved that attention. And he of course, loved the market - all the different smells, the different people, the walking through the streets. So many adventures!

But Groucho's favourite walk was out at Howth - oh wow, was that the best ever. And his super canine powers were really put to the test - chasing the birds, chasing the waves, finding blackberries, eating fish and, on special occasions, even a little bit of ice cream. Groucho loved those rambles - especially when it was along the cliffs and he could sniff all the interesting smells and he could say hello to all the other dogs that were out on their walks. 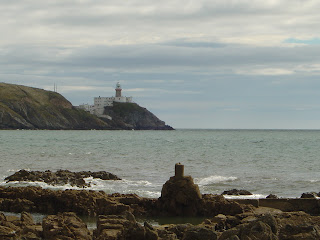 The pier was great fun as well as Groucho loves the wind in his face and he loved barking at the waves and the seals as they bobbed up and down in the water. And he loved visiting his friend in Howth because her house was right on the beach and boy, was that cool. Groucho was allowed off his lead and he would use his super canine sprinting power to chase all the birds, run around with the other dogs and have a chat to them about life and he would keep running even though his little legs were tired! But the best part was actually going out to Howth in the car - Groucho loved to stick his little head out the window and his whiskers and ears would flatten out and everyone would smile and wave at him. Groucho's greatest super canine power is his ability to make people happy! He really is an amazing dog.
Posted by Groucho at 09:24 No comments: