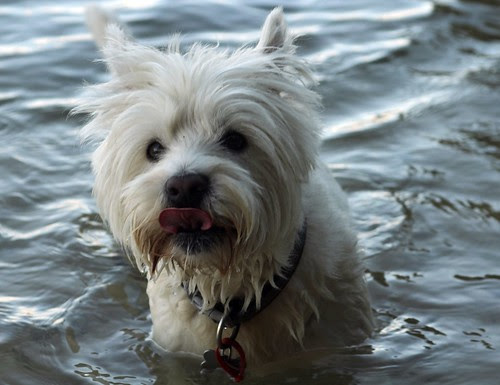 The She Two Legged One thought I should put this up on my blog because She read this very funny quote "The most affectionate creature in the world is a wet dog" (by some two legged person called Ambrose Bierce) - and She says that I am ALWAYS affectionate after a swim or a bath (bah, baths, bad bad word) or when I come back from making Frost Grouchos on a cold morning - I am ALWAYS so friendly and so affectionate in this situations - and so ready to share my shaggy wet fur with her - and of course, I'm ALWAYS willing to shake my wet fur all over the place and then try to jump into her lap or on her legs. When I'm dry, I'm quite ok to maintain my distance!! I wonder what that's all about?

And, oh, by the way - you know how I was all clean and smelt nice and was all white and fluffy after my bath on Sunday - well, I showed Them - on Tuesday evening, on our walk, I snuck off and did a sguillion Wesite Rolls on a patch of sand that was all wet from the dew and I am now an orange Westie. Seriously, my head is very orange. That'll learn them to try to make me all cute and white and fluffy and clean. 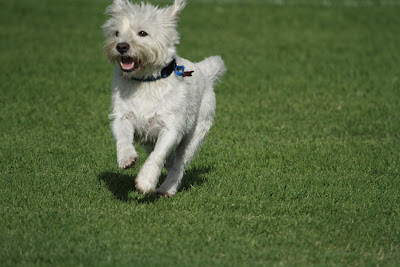 Well, isn't my buddy Hoke the BEST - he gave me an award - thank you Hoke! And a HUGE congratulations to Hoke for being awarded as well. Well done Hoke!

So, I have to choose five dogbloggers - it was hard because I read a lot of blogs (and love them all) and also, it was hard because I haven't really built up a huge following - I'm still kinda getting into my blogging groove (and by that you realise I mean that the She Two Legged One is a bit hit and miss with helping me out - something about being busy with work and chores and stuff - I personally think she's just a wee bit disorganised) but I'm going with: 1) Pebbles 2) Rolo 3) Douglas 4) Luna 5) Popcorn There are some rules that go with the award which are: 1. Thank your Liebster Blog award presenter(s) on your blog - CHECK!! 2. Link back to the blogger(s) who awarded you - CHECK!! (by the way, my blog skills were defecient here - all the four legged ones named ie HOke, Rolo et al, have links back to their blogs but der, silly me, my link colour is not different from my normal text colour - but if you hover over the names, you can then click on it and you'll go straight to these pawsome blogs!) 3. Give your top 5 picks for the award in a post with the copy of the rules - CHECK!!! 4. Inform your top 5 by leaving a comment on their blog - CHECK!!!!! 5. Post the award on your blog - CHECK!!!!! Thanks again, Hoke! I have to go now - apparently, I'm off for my walk. I had a bath this morning so I'm going to go make myself dirty again. Woof for now. Groucho
Posted by Groucho at 08:35 7 comments: 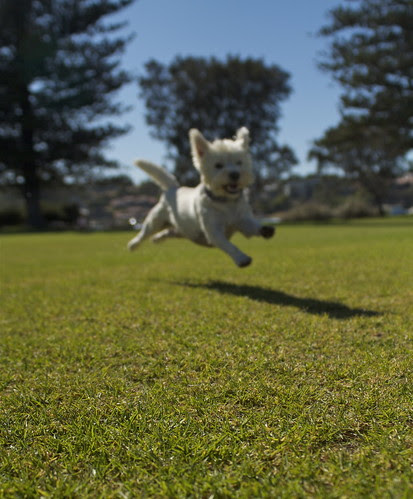 Thanks to my dogblog buddies for your get well wishes - I'm better!!! So, this is what I"m going to be doing on the weekend - running and jumping and swimming!! YEEEHA!!!!

Hope you all have a GREAT weekend!


PS It's the She Two Legged One here - we aren't convinced young Groucho is actually feeling better at all - we think he may be pretending, a tad, as he has heard us say 'Oh well, Groucho, looks like a trip to the vet!' so we will be keeping a very close eye on him over the next few days. !!! 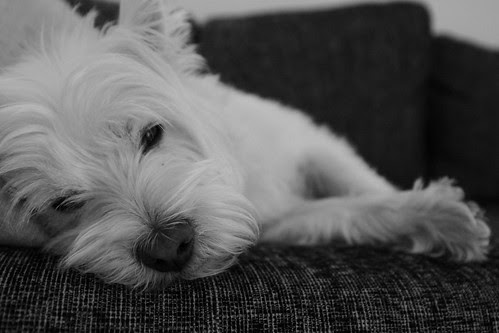 I'm not well so it may be an even quieter week from me. This is an old photograph of me but trust me, this is how I spent yesterday ..... We don't know what's wrong with me, but I'm certainly not myself. I may, just may, have eaten something I shouldn't have on Sunday (who me?? Never!) .... my tummy was rumbling and squealing and making so many loud noises yesterday that the She Two Legged One asked if I had swallowed an entire chicken coop (as if - seriously, she asks some silly questions sometimes!). She knew I wasn't well because I just slept all day and I didn't even want one of my treats .....

I was a little bit better this morning ... so hopefully I'm on the mend. BUT, I heard THEM whispering that I'm not to have anyting 'special' for the next few days, just my dry food with the kangaoroo and no treats (unless they are the healthy ones which I don't really like anyway because, well, they are healthy - what's the point?) . I am NOT impressed. And I'm not a fan, I can tell you, of this expression they keep using 'It's for your own good'. I've no idea of the literal meaning of that expression, as after all, I'm a dog, but I do know it usually means I'm going to miss out somewhere along the lines!

Just when I thought it was safe ............. there I was, just checking out my territory - we were at one of my favourite historic places, where usually, at the time of day we were there, I have the place to myself - and it's great stuff, you can smell the ocean, I can roll on the grass, I can check the pee mail - but this time, there were some two legged people all dressed up having more photographs taken of them than the He Two Legged One was taking of me (and that's a lot!) - I heard the Two Legged Ones mention a 'wedding' and I was told I was NOT to go near these two legged ones (which of course I proceeded to do) as it was An Important Day for Them and They Would Not Want a Groucho In Their Photographs (really?? I thought I would add a special touch to their photographs!). Anyway, I was not best pleased with having to share 'my' place with them but I let it go - after all, it was big enough to share really but I did stare at them for a loooooong time, just to let them know who was boss of the place - 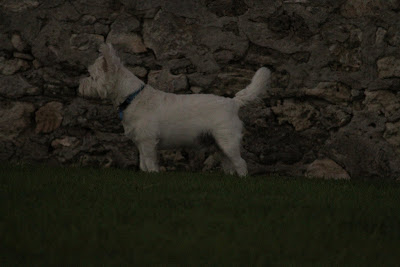 At this point, I figured the new camera lens was far enough away for me to do a few Westie Rolls safely, without that lens prying into my business but NOPE, the He Two Legged One managed to take this photograph of me - and, while I admit it's a bit annoying having to deal with all this attention and lack of privacy, secretly, I think this is quite an artistic shot and I'm happy enough to share it on that basis BUT this is NOT to say that I've come to terms with this lens thing ...... I'll find a way to outsmart it, I really will!!! Woof for now. Groucho 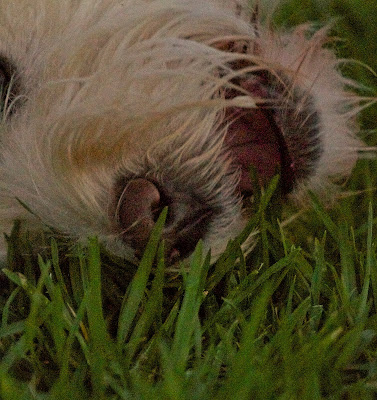 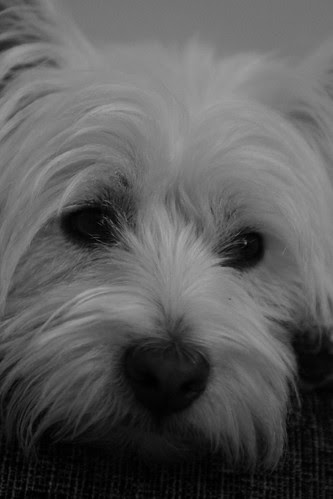 Hmmm, as you can see, I'm a bit concerned - I've been hearing myself referred to as 'little dog' quite a bit by two legged ones (obviously not MY Two Legged Ones - they know better) - random strangers on the street who say 'oh, isn't he a lovely little dog' - I'll take the 'lovely' no problems but 'little'??? Maybe I am and I guess it doesn't really matter in the overall scheme of things but I always think of myself as a HUGE four legged one, a MASSIVE Westie - the Two Legged Ones say it's because of my big personality and because I hung around VBD (very big dogs)when I was younger and I think they could be right - I guess I think my body is not little because in my mind, I'm an all conquering, fearless, big hearted Westie. Hmmmm, I'll have to think about this some more. 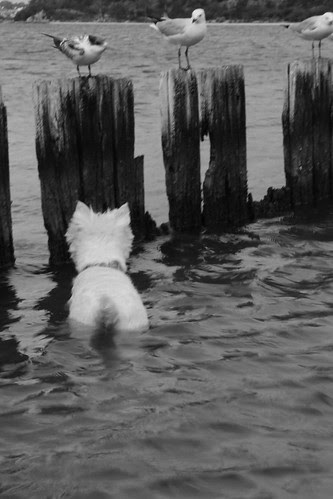 I'll get you!!, originally uploaded by Wonder Westie.

Well, we had such a busy weekend that the He Two Legged One hasn't got around to uploading his photographs of me but I'm here to tell you about those birds - not these ones, but I'm sure it was their cousin or uncle or aunty or some relation who had a go at me on Saturday evening - and, for once, I wasn't asking for it (as, in fairness, I am usually trying to catch them as you can tell here!). We went down to the wharf on Saturday evening, so the He Two Legged One could take some night photographs with his new lens and so I could smell all the fishy smells - the wharf is a great place for a walk - SOOOO many smells to investigate). Well, we had a lovely time, and I walked for at least an hour, smelling everything, walking as if I owned the place but then, on the way back to the car, just as the moon was rising and everything was looking so peaceful and pretty, WHAM, two seagulls just went for me - repeatedly. The Two Legged Ones had to protect me (which was a bit bad for my ego I have to say) and scare the seagulls away - I wasn't really scared, just a bit shook up as they meant business and had a co-ordinated attack plan in action. I wasn't best pleased but I figure it was payback for my always trying to catch them (although, honestly, seriously, this time I didn't do a THING to set them off!).

And, anyway, I wouldn't be very tasty would I, even if they did manage to peck me - honestly, what were they thinking??

A Swim in the Rain 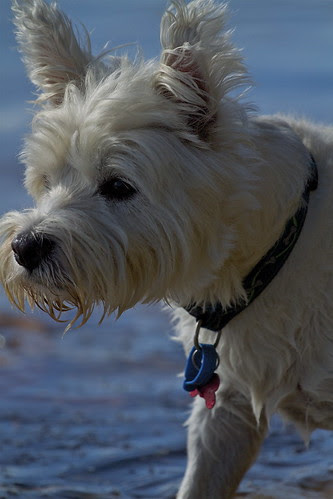 The weather on the weekend was fantastic - you probably can't tell from this photograph (and yes, it was taken with the superduper new lens - seriously, will I ever get any privacy now????) but it rained on the weekend - I know it looks lovely and sunny but it BUCKETED down on Saturday night and I was soooooo happy. I LOVE cold weather and puddles and wet grass and all the brand new smells that come out after rain. But, on Sunday, it was quite warm in between the showers so I had a quick dip - and chased a few seagulls which is what I'm concentrating on here.

And apparently, with the cooler weather I'm back into 'puppy mode' ie full of beans and mischief - in fact, the other morning, I heard that 'brat' word mentioned a few times - being a four legged one, I've no idea what brat means but I'm working on the assumption that it means smart, clever, sassy!!