Can I cross now? 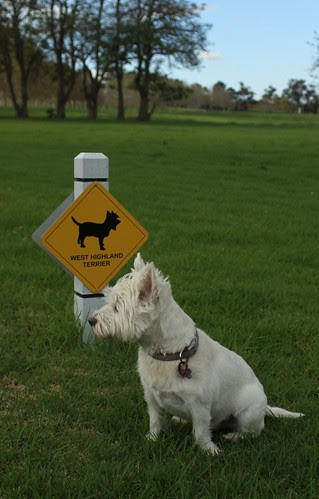 Can I cross now?, originally uploaded by Wonder Westie.

So, on the trip 'down south' a while ago (refer to 'Going Places' below), the Two Legged Ones found this sign and oh dear me, wasn't there great excitement (from one Two Legged One in particular - you know who) - I had to get out of the car (never a hardship really) to investigate with them and while I'm sure they would like you to think that this was a 'natural moment' we all know that this is a staged photograph - but, who cares, staged or not, I still figure I look quite handsome. And I have to admit, it's quite a cool sign! 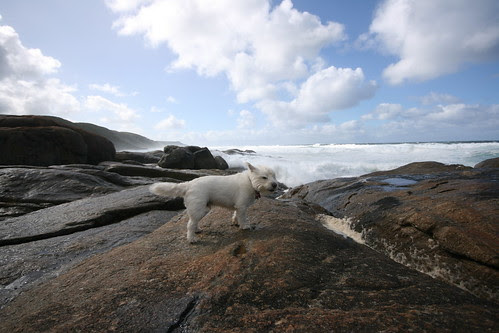 Well, the Two Legged Ones are talking about an Autumn break. I am hearing a lot of talk about this place or that place and I am just putting this out there as a reminder to them of where I would like to go this year! This is my favourite beach in Australia and I had the best time, I mean, the best time I've had since I arrived Down Under, on this beach. Let's hope they read this and remember that any holiday which involves me must also involve a beach, sand dunes, rocks and birds to chase! I'll keep you posted on the final decision. Woof for now. 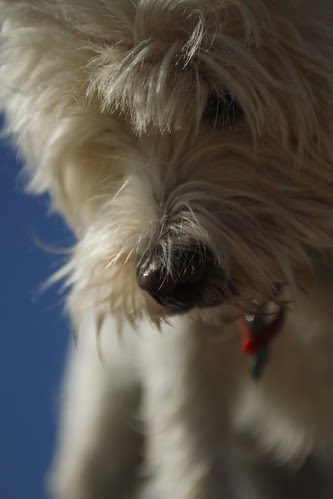 Well hello again. Not much to report from Down Under. We have had some lovely, gorgeous, lashing rain (complete with thunder and lightning which I love), some of which made it inland to those poor farmers who have had year after year of drought, so that's great news! The Two Legged Ones went away a few weekends ago to 'farming country' and they said it was lovely - all green and lush. This photo was taken last weekend when there was a break in the wet weather and I visited one of the many beaches I love to visit - the sky was incredibly blue, I went for a swim, chased some seagulls, visited the sand dunes and did some rock climbing as well. I'm an all terrain dog for sure! Anyway, off to eat a Kong now. Woof for now!

Well, here I am again, at the beach.  I'm truly a Down Under dog now - even in the cooler months, I'm swimming!

However, I am still very much into investigating the sand dunes - I started this habit during our visits to Galway, and have continued it over here - even though I'm a good swimmer these days, it's the sand dunes that have the best smells!  I've included a photo for you of me racing down a sand dune - as usual, I completely ignored the Two Legged Ones when they were whistling for me (as I'd discovered a particularly interesting stick) so, when I decided that the stick had been sniffed enough, I had to race down the sand dune to catch up with the Two Legged Ones.

Well, I'm off to bed now.  Had a big day today - went to the market this morning (I am well known there by now - and, of course, am very popular), then for a long walk at the river (went for a swim, of course), followed by a nap then another long walk to another part of the river - found a new jetty which was rather cool and the three of us sat on it, watching the water, the boats and enjoying the Winter sun and realising how very lucky we all are!  The Two Legged Ones have been saying that I've started snoring in my old age but I beg to differ.  I've never heard myself snore!  Woof for now.