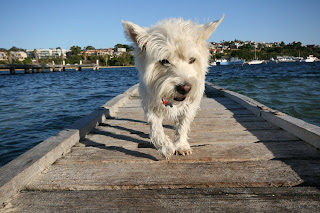 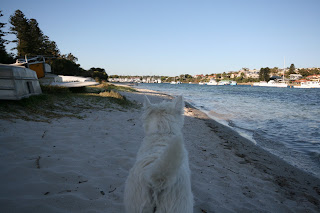 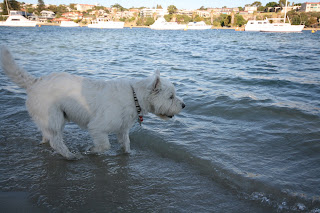 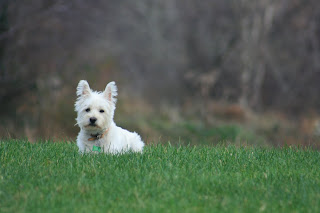 Well, it seems I'm not much better than the Two Legged Ones but, in fairness, it's been a busy 18 months or so.  After just 12 months in Ireland, we decided to take off to Australia so here I am, in the land of roos, koalas, BBQ and dogs and people with funny speaking patterns.  That's taken me a while to get used to but hey, I'm a super westie so it's grand now.
I had to spend 30 days in quarantine when I first arrived which wasn't too awful but wasn't great either like.  But one of the Two Legged Ones visited me three times a week and that was great - I got to run around like crazy for 30 minutes.  And, well, you can imagine how much pampering and spoiling I got when I was busted out of quarantine can't you - geez, the Two Legged Ones (one of them in particular - and I'm sure you know which one) were overwhelmed to have me back in their lives and I was treated like the head honcho for quite a few days, I can tell you.  Oh, she hugged me and patted me and picked me up every opportunity - but sure, what can you do like but go along with it.
But the quarantine was worth it - it's a great experience being here - I'm looking on it as my gap year kinda thing.  The most amazing thing is that it hardly ever rains and after a summer in Ireland of 59 days straight of rain, this is just brilliant.  And, I can go nearly everywhere with the Two Legged Ones which is really really mint.  We live close to two Doggy Beaches and the most amazing river which has a 'Dog Exercise Area' (these Australians are very big on signs and defining 'Dog Friendly Areas' which is all a bit bizarre).  As you can tell from my photo, I'm well used to  splashing around in the water although not that fond of actually swimming (Westies are, after all, not water dogs).  I've become acquainted with the local magpies (same colours but different bird call than the ones in Ireland - but that didn't fool me, I knew they were still magpies and therefore, still my arch enemies and needing to be told who is the boss - I did that my first day here and boy, were they put in their place), I'm an expert at meeting the local two legged ones (Westies aren't really that common over here so they always make a fuss of me) and, frankly, life is pretty cool here.  I mean, I miss Ireland, in particular our holidays to the West, but hey, for a while, I can put up with this.  I mean, what's not to like - two days a week I go to the river with three buddies and one day a week I go the park with four of my other buddies, the other two days, I get spoilt rotten by one of the Two Legged One's parents (I call them the 'Older Two Legged Ones'), on weekends I go to the beach or river in the mornings and the evenings and, on Saturday and Sunday mornings, after a long run at the beach or river (where I meet loads of other Four Legged Ones  and we sniff and pee and run around and solve the problems of the world), I take the Two Legged Ones to a cafe where Four Legged Ones are catered for - generally, by just being my very cute self, I'm given bacon, toast etc - it's simple, I just sit there and look cute and well, I end up being given treats by the Two Legged Ones and any other two legged ones sitting near by - to mix it up, I sometimes take the Two Legged Ones to a local pub and hang out in the beer garden with them so they don't feel uncool.  I, of course, get loads of attention there as well.  Sure, it's an easy enough life like and I can't complain.
It is coming into Autumn so the Two Legged Ones have told me to expect some cooler weather but I'll still be able to visit the river and/or beach on the weekends as it doesn't rain too much over here which is brilliant.  And, there's always town anyway - I often take the Two Legged Ones into town on the weekend - if they behave, we go to a cafe for a latte and I watch the world go by while they drink that addictive stuff and read newspapers.

Anyway, better go now.  I've put some photos in for you all to take a look at.  There are more as, as usual, the Two Legged Ones are going a bit silly with the photos of me. I mean, all I want to do is run and sniff and get those rabbits which are constantly taunting me and the Two Legged Ones hold me back to take photos of me!!! But I'm off now to nudge them and stare at them beseechingly in such a manner that, eventually, they will give in and take me to the river. Stay tuned for more stories of the Australian Adventures of Groucho.  And a big woof to all of you back home (especially you, Lily!!) - hope the Big Park is still going strong and that, with Spring here, you are managing some great walkies and sniffs.
Posted by Groucho at 08:13 No comments: