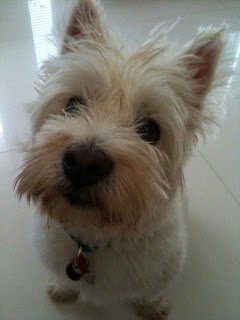 Wow, I'm so lucky - my Westie buddy, Hoke, tagged me! Thanks so much Hoke, you are very kind. I don't know a lot of other blog dogs so I'll have to come up with a few others to tag myself! I've never been tagged before - well, not like this - the Two Legged Ones and I play tag quite a bit when we are on the cricket oval - we chase each other like crazy - it's a kinda form of tag!

So, here goes and thanks to you, Hoke for thinking of me!

1 Describe yourself in 7 words - charming, handsome, hyperactive, spirited, determined, smart, modest (Two Legged One here - really, Groucho, you, modest???)
2 What keeps you up at night? Well, I'd like to be all philosophical here and say, the meaning of life, why some of us have amazingly blessed lives and others have awful, dark, sad lives but while at times, these things do worry me, I'm a Westie and the main thing that keeps me awake - how on EARTH am I EVER going to get those crows???
3 Who would you like to be? You know, I'm very happy being me and I know the Two Legged Ones think I'm not very modest, but this is honestly not me being immodest, it's me being happy with what I am and I'm a pretty happy Westie I can tell you!
4 What you wearing now? The blue Fuzz Yard collar I got for my birthday. It's very cool
What scares you? Nothing, I'm a Westie. It's a Two Legged One here again - seriously, we could not let this slight exaggeration of Groucho's go - Groucho is 'apprehensive' about a) the dogter b) the groomer c) two legged ones with very loud voices and d) two legged ones who are mean.
6. What is the best and worst thing about blogging? Well, of course, the best thing is meeting new buddies - even if I don't see them, I love reading about the adventures of Hoke, Higgins, Wyatt, Bouncing Bertie etc - it's a whole new world for me and it brings my Two Legged Ones a lot of joy as well and I think that's the best thing. The worst thing - just not having enough time to do it all!!!!
7. What's the last blog you visited: well, it was Hoke, the Wild Westie ! I had a good old chuckle about his "battle for the couch!
8. What's one thing you wish you could change about yourself? Ah, it's back to the modesty thing again, isn't it - I'm a Westie, I'm happy as I am but well, ok, I'm a bit over the top sometimes - I can go into overdrive over flies, cats, sneezes (yes, sneezes) so maybe I could cut back on that and, apparently, I'm a bit lazy - ie I don't help out that much around the house (I've no opposable thumbs so I've no idea how I'm supposed to do the dusting or hoovering anyway)
9. Slankets: I'm sorry, but I don't know what this is - is this the same as a blankie???
10. Tell us something about the person (four legged one) who tagged you: Well, I think Hoke may well be my long lost twin - his antics are great - I particularly like the stories about his rabbit chasing (a Westie after my own heart - you go Hoke!) and I love to read about his home life. He sounds like he has wonderful two legged ones and we all really enjoy reading about his life - he's always very funny and he makes our day whenever we read a new post. I think Hoke is full of fun, humour and very smart - and like all us Westies, very pleasing to the eye

So, I'm back from Holiday Camp and finally catching up on my correspondence - thanks to all the newcomers who saw me on PBU and visited my blog! It was great to 'meet' you all! Anyway, the Two Legged Ones are back from their favourite Australian city - I've heard all about their adventures, including rather boring details of the coffee they drank (apparently they spent a lot of time drinking coffee) - 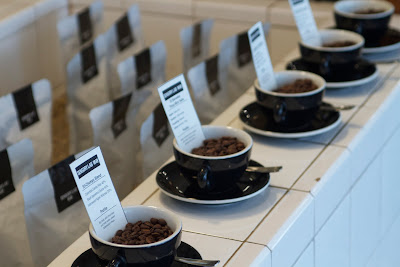 To celebrate us being together for the first time in a week, the Two Legged Ones took me to one of the universities where I read about this fellow (some guy called Socrates - very clever apparently) - 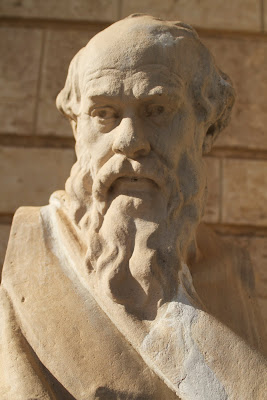 and I walked the hallowed halls of learning - 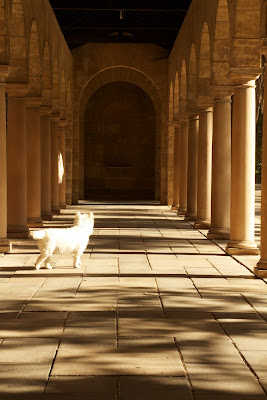 BUT, best of all, I saw this amazing art piece - it was so cool - this floating flower, which puffed up and down - well, I supposed 'puffed' isn't the right word - it open and closed, like a real flower would at certain times of the day - oh, it was really very clever and, if I say so myself, I think it rather sets off my white fur, doesn't it? 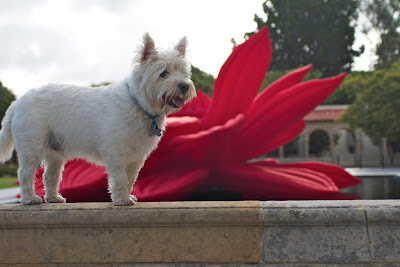 It was sooooo great to have the Two Legged Ones back and they told me, over and over again, how they missed me - I have been very much hugged, tummy rubbed and chin tickled since they came home and, so far, we haven't had TOO many power struggles although there was a bit of an issue this morning when the She Two Legged One expected me to go HER way on the walk and not my way (the older two legged ones let me go whichever direction I want, you see). But I'll learn her yet!

Off to Holiday Camp 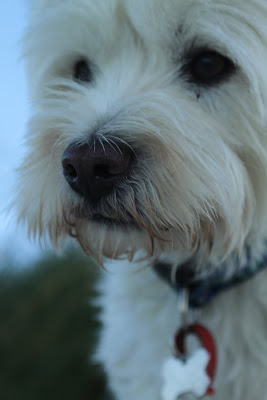 So, I thought the Two Legged Ones should see this photograph of me, every day while they are away as it shows me at, I think, my handsome-est - yes, they are taking off soon, without me. I suppose I cannot really complain as most holidays, I go along (Two Legged One here - most holidays, Groucho doesn't 'go along', most holidays revolve around him altogether!) and I know they miss me and when they come home, I am extra loved - loads of walks, tummy rubs, treats - and while they are away, I'm going to Holiday Camp - this is the older two legged ones' house - I call it holiday camp as, while I'm expected to remember my manners, I am completely and utterly spoilt - I rule the house, I have walks when I want them, I sleep wherever I want and wherever I go, I am made a complete fuss of. So, it's a holiday for me too really!!!

But, of course, when the Two Legged Ones return there's always a bit of an 'adjustment period' (as they call it) while I try to bring my holiday camp routine to the home - I never manage to convince the Two Legged Ones that it should be holiday camp rules every day ....... I mean, honestly, what exactly is wrong with getting everything I want, when I want and how I want?????