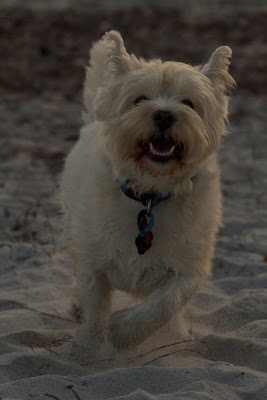 Wow, what a weekend we have had here. The Two Legged Ones had an extra long weekend - no, it wasn't for the Diamond Jubilee (although that has had a lot of coverage 'Down Under'!), it's for something else altogether but, well, to be frank, I'm not that concerned about the reason for the extra day off, I'm just interested in the extra fun I had. And, you know, the Two Legged Ones have been soooo busy lately that it was pawsome to have them around a bit more - mind you, no matter how busy they are, I still have my walks, my one on one time with one of them each night (they take it in turns), etc, it's just that I don't get to blog as much - something to do with me not being trusted with the computer by myself. They reckon I'd end up with 'square eyes' as I'd spend the whole day messing around with blogs, downloading music etc - but the computer screen is rectangular so I've NO idea what they are waffling on about. Anyways, we had a BRILLIANT weekend - the weather here was wonderful -you'd never guess it was Winter, it was soooo warm. It started off with a very very long walk on Friday evening - when the She Two Legged One arrived home from work, I was limping very badly. So, She said, well, no walk for you Groucho. And, of course, by some miracle, the leg was fine within, oh, a nanosecond of her saying that - so She said ok, just a short walk around the block. And I said, very quietly to myself, no way, buddy, that aint gonna happen. So, every time She tried to head for home, I dug my paws in (which, I am proud to say, are now very dirty again) I sat my bottom down on the footpath and I refused to move (which I know is not good behaviour but it was such a wonderful evening, cool and fresh and soooo many smells) and, I have to say, for once, it worked, I got my own way, She agreed we could go for a longer walk as my leg was fine with no trace of a limp at all - and She said it was just what She needed after a week cooped up in an office every day for long hours!!!. But I know there will be a visit to the dog-ter coming up as I heard Her mention to the He Two Legged One that it could be arthritis whatever that is, as I do limp a bit in the morning, but only in the cooler weather. Then, on Saturday, we went to the beach where I met some VBD (very big dogs) and hung out with them. And had loads of swims and I ran and ran and ran. I did so many zoomies up and down the beach that I was pretty tired, I can tell you, after only a few minutes. You can just seem me in between the legs of one of the VBDs in the photograph below. And there's a photograph of one of the other VBDs who I met - he was great fun, he was very much into zoomies which was fine at first but after a while, well, you know, his legs are MUCH longer than mine so I decided to let him off by himself - it wasn't that I couldn't keep up, you understand, it was just that well, I decided to conserve my energy for the swims! 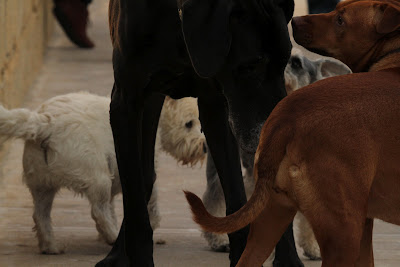 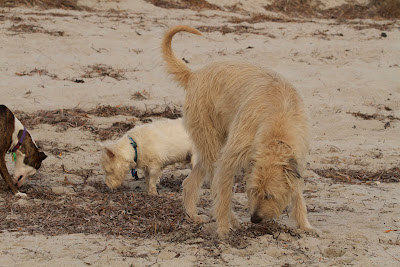 There was a lot more going ons but the He Two legged One wants the comp-ewe-ter (as we call it) so I have to go. But I've put up some photos of my great weekend and there will be more later, now that the She Two Legged One has promised to stop whinging about her workload and spend more time helping me with my blogs. Woof for now. Groucho 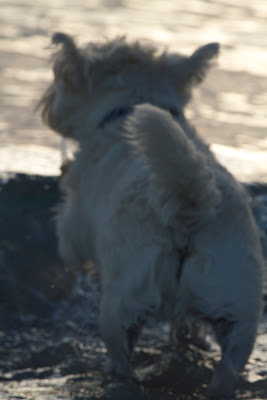 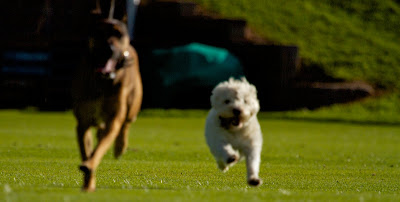 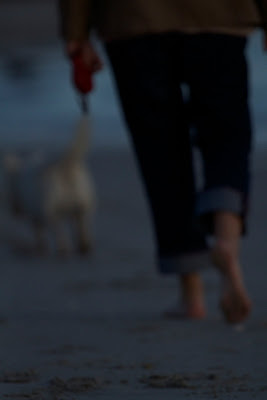 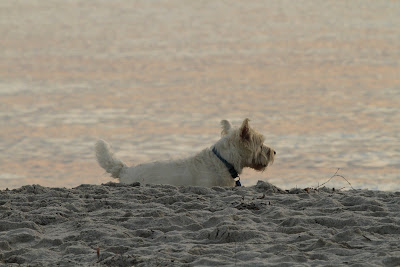 ZOOMIES! omdog, I love Zoomies and I am very fast too! My peeps have been busy too, so I understand your plight there! Looks like they found some time for you though and btw, I like your style on digging in and holding your own and getting longer walk time...I may try that! Love your photos!

Hey Groucho. Looks like you had a fantastic weekend! Hope your leg is ok. You're lucky you got to go to the beach. It rained all weekend here. Tell your parents you need your own laptop to blog. We love your blog! x

Wowee! What a super great weekend you had! And good job on digging in your paws on the walkie. Sometimes the humans have to be remind about who's in charge. BOL!

Hi Groucho, we love those zoomies with the big dogs. We usually go on Saturday mornings.....and get VERY dirty, heeheehee.

Good move--doing 'the anvil', we do that sometimes when SHE thinks the walk is over!

Lovely weekend. Hope your leg is doing okay. If it is arthur-itis, I'm sorry. But it shouldn't stop you!!

Oh, I do LOVE the idea of my own laptop. Hmmm, do you think that would be a good birthday present for me????? That would learn them wouldn't it, I could have my own laptop, my own broadband account ...... Brilliant idea!!!

Groucho, it looks like you had a grand time! I'm glad you got some extra time with your peeps & I hope that your leg doesn't bother your any more.

Wow!!! Nice to meet you! :) I cannot believe a nice and charming pup like you was sent away to be 'dealt with' in a 'permanent' kinda way... some humans do not deserve to have a leg hiked up to put them out if they were on fire,if you know what I mean.

I've added you along to our Google Reader and joined you via Google Friend Connect... so now we can keep up with what is going on with you!

Thanks for the comment and for being so positive... :)

Milo (typing for Dixie who is asleep, Mom who wishes she was still asleep, and Newby who is still trying to figure out where I hiddeded his favorite stuffy yesterday)

Teehee. i love zoooooomies! It looks like you had a really fun time Groucho! :P Oh yes, we must always persevere so that we get our way! *Paw^5*! tsktsk.

IT would be great if you could send my peeps a note and tell them that I need a long weekend...one that includes walks and treats and walks and walks...and one without the monster...just me and them!!!! Thanks buddy for sending out the note. I appreciate it!!

Groucho we love seeing you have so much fun, but dude watch out when you stand under those big dogs. You see I had this incident, a big dog gave me a shower and dude he did not even provide me with soap or a towel.
Sweet William The Scot